I noticed that the (US) media has been bandying around ‘inflation’ more often than before lately. To be sure that it wasn’t a “it is just me?" moment, I consulted the ‘Oracle of Mountain View’ to get a reality check: 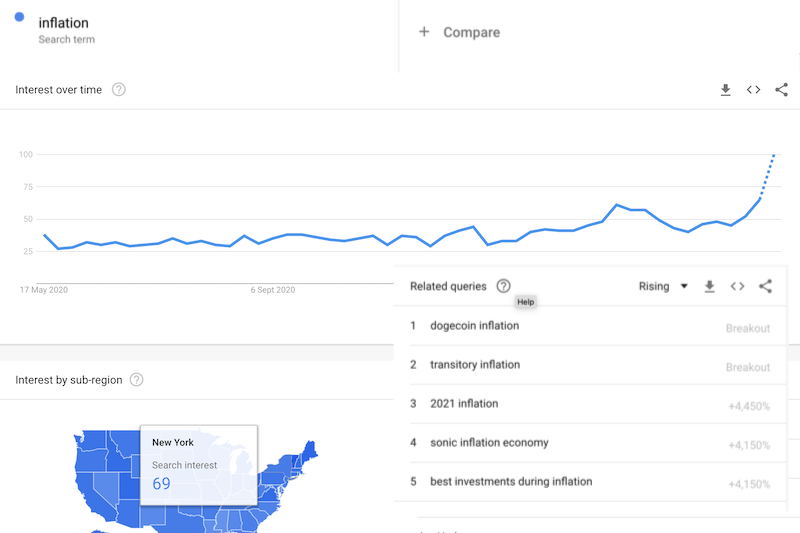 The trend seems to suggest a change in attitude around “inflation” lately, that ‘it is coming’ (ominous music playing). I can believe that is true, given a number of basic materials, such as timber, housing and energy prices have risen quite rapidly over a span of a year. A simplistic answer to why this is the case, was that the US had printed 20% more money last year, as a way of addressing its economic downturn due to COVID. But as far as I know, the price increases had already started around 6-9 months ago, so why didn’t people’s collective and media interest increase until now?

This ‘fear-mongering’ had apparently been the cause of the jittery market for technology stocks, many that has seen a share price drop of 30% or more, despite some having another blowout quarter during recent earnings calls. To put it simply, it defies common sense. Things weren’t any worse 2 quarters ago, then also, the finance heads were saying that the increased money would mean people/corporations would have more money to spend, resulting in more revenue, which was roughly true for a good number of the tech companies. But now, the media circuit is painting the same narrative as a negative, as a bogeyman for explaining the sudden drop in technology stock prices. How trustworthy is it, when the media is telling the same story both ways?

In any case, I’m not saying that the phenomena of inflation isn’t real. It is, and it is self-evident when houses in the Bay Area can be sold for USD$200K above asking prices, or when a fresh chicken drumstick that costed SGD$2.00 last year is now SGD$3.00, (according to some unverified first-person sources off the Internets). As such, the pressing issue that is on my mind is, “how do I get out of cash and keep my net worth safe?"

The obvious thing to do, is to buy up any useful asset that isn’t grossly inflated in price right now. Houses (outside the Bay Area, maybe) would be one of them. Also, at this time in history, it is probably one of the few rare times where it might actually be wise to rack up long-term debt - we’re probably unlikely to revisit such low rates in the future, and if massive inflation did come to pass, you’ll likely be repaying cents for any real future dollars owed.

However, I already owned a home with a mortgage, not to mention that Ireland has an unfavourable local interest rate environment to take advantage of this. But if I had been a UHNWI, maybe it could have been possible to call up a personal banker to, say, write up a loan from the Netherlands at negative interest rates, where you get paid for the privilege of owing them money!

But that’s just building castles in the sky. Let’s go back to reality.

As I write this, it does appear that buying technology stocks would be exactly the kind of thing to do. It sounds crazy that while the media circuit is going full-tilt about how inflation is going to destroy the tech economy, or that it’s a moment of ‘you’ll be catching a falling knife!', but hear me out.

First and foremost, I acknowledge that US Tech stocks are highly volatile. The prices from day to day can swing between 20%, or 50% within a week, depending on how manic or depressive the participants are feeling for a given stock. However, it should also be clear that, unless there’s some real adverse material changes in the company’s operating climate, these numbers simply represent the current traders’ hopes and fears.

To give an inside-track of how price-fluctuations really don’t correspond to reality, here’s my perspective of it. I work for a listed tech company, which from time-to-time at the company’s town-hall, we’re given insights to how the business is doing. There were at times in which we had access to some early insights regarding big customer wins, and yet, for the weeks after, the company’s share price would trail downwards, as pundits speculated on how overvalued the company was (now, which tech company wasn’t?!). Then, as quarterly earnings approaches, the stock price would magically rise again, right till the day of the earnings call, in which 70%(?) of the time, a selloff would occur, rinse-and-repeat. The only time in which I can recall when the stock bucking this trend was in 2020.

However, it isn’t that such a pattern is a sure thing to bank on, but rather that companies somewhat follow a pattern/trajectory of sorts. But whatever pattern it follows, it isn’t really anchored to the actual business itself. Following that, if the company has:

it should be a good viable business for the long-term, in which its performance should outpace inflation itelf. And if the market currently wants to offer a margin of safety for buying its stock, all the better!

At the moment, I’ve only dipped my toes in the water for a small amount of technology stocks I liked, and keeping an eye out for any good deals. However I probably won’t write about any individual stock, nor provide any updates on them, unless there’s an upheaval with the US monetary policy, think something along of Paul Volker’s massive interest rate increases. Perhaps then, I would write an update on whether if I will change my strategy, or at least observe what will happen to the stocks.

Is It Summer Yet?

To try to spend time as wisely as possible